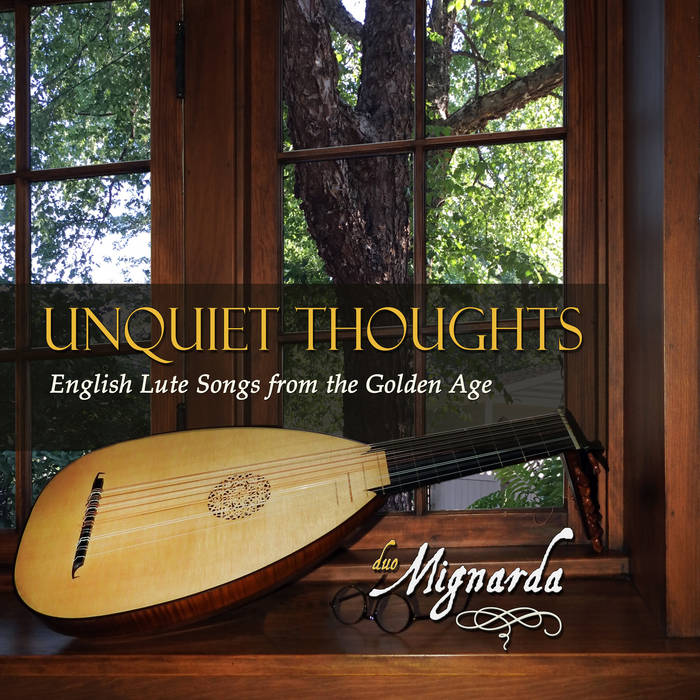 Unquiet Thoughts presents a personal selection of our favorites by John Dowland (1563 - 1626) and a few of his contemporaries with a concentration on songs with exquisite poetical texts by some of the best poets of the Elizabethan age. It is no accident that we chose the very first song from Dowland's First Booke as the title of our album, as the eloquent term so appropriately describes a genre that pairs an intimate voice with the most personal of instruments to express the secrets of the soul. Unquiet Thoughts is also the title of our blog that has since 2010 offered our insights and experience of music for voice and lute, soon to be published in book form.

John Dowland's ayres for voice and lute represent the pinnacle of a musical form that appeared in manuscript and printed sources throughout Europe for at least 100 years prior to the publication of Dowland's First Booke in 1597. Continental examples of lute songs distilled an arrangement of polyphonic vocal music that assigned the lower parts to be played on the lute. English music for voice and lute prior to Dowland's First Booke consisted of psalm harmonizations and secular poetry set to Italian dance grounds.

Building upon this foundation, Dowland retained the rhythmic vitality of dance forms improved with his gift for melody and expressive text setting. Strongly influenced by French and Italian examples, Dowland forged a new style of accompaniment that drew upon the resources of the lute, employing characteristic plucked-string techniques such as cross-string suspensions, rhythmic syncopations and running passages interspersed with expressive chordal events, creating a rich and complex musical effect.

Our recording opens aptly with Dowland’s very first song from his First Booke, “Unquiet Thoughts.” We feature other iconic songs by Dowland as bookends surrounding worthy works of poetry by Thomas Campion, Sir Philip Sidney and Samuel Danyel, all published in The Mignarda Songbook Volume One: English Ayres. Dowland’s song texts set mostly anonymous poetry, but in recent memory Anthony Rooley has proposed that some of the poetry set by Dowland may be attributed to Robert Devereaux, the famous Earl of Essex, adding an interesting angle to the broad story of Elizabeth melancholy.

The three lute solos featured on our album are all drawn from a single manuscript source: Cambridge University Library Add. MS. 3056, formerly known as the Cosens Lute Book. The manuscript includes several well-known solos from the golden age of English lute music, but each piece is given a unique twist one way or another.

The version of Dowland’s famous “Frogg galliard” (lute solo version of the song, “Now O now I needs must part”) bears idiosyncratic yet appealing decoration. The untitled Fantasia attributed to Dowland is a veritable discourse on the famous “Lachrimæ” theme and the many ways it may be woven into the fabric of a free-standing fantasia. John Danyel’s “Rosa” is an instrumental setting of his brother Samuel’s 1592 poem "The Complaint of Rosamond," which illuminates the legend of Rosamund Clifford and her unhappy dalliance with King Henry II. The tolling of the death knell in the third section of the pavan says it all.

A word about interpretation:

From the beginning of our work as a duo specializing in music for voice and lute, we have followed a very different interpretive path from most performers in the genre. Our interpretations delve deeply into the meaning of the language—and the clever bits hidden in the music—in an effort to attain a level of performance that honors the original context and performing style of each and every song.

As working musicians, we understand from an insider's perspective that the published scores of the repertory of English lute songs represent only a starting place, and that 17th-century musicians would never have been bound by the constraints of our modern pitch reference (A=440 Hz) with the resulting chirruping sounds when performed without judicial adjustment. It is well-understood today that historical lutes were larger, strings were thicker, and reference pitches were generally lower. The evidence indicates that most of Dowland's solo songs were intended to be sung in the tenor range with the octave transposition implied. We make use of different lutes tuned to gentler pitches in order to adjust the range of the song for optimal communication of the text, as we are certain was done originally.

Our recording of English lute songs is dedicated to the memory of Edward Doughtie (1935-2014), Professor of English Literature at Rice University and a specialist who possessed a broad and deep knowledge of the poetical texts from which the songs of Dowland and his contemporaries were drawn.

In his iconic Lyrics from English Airs, Harvard University Press, Cambridge, 1970 — in near-constant use in our household — Doughtie traced with conciseness and clarity the evolution of the unique marriage of words and music that became known as the Golden Age of English lute songs.

Ed was generous with his knowledge of the sources, context, and meaning of English lyrics, and our interpretations have benefited tremendously from our many conversations on the subject. His influence on our approach to the texts of English lute songs was at first through his essential publications but was later reinforced through a very active correspondence and culminated in his contribution of an essay published in the booklet of our 2013 recording John Dowland: A Pilgrimes Solace.

Ed kindly expressed his appreciation for our interpretive insights, and he even composed a new lute song for us. He clarified many textual details that bridge the vast chasm that lies between simply performing a song and completely inhabiting the emotional context of a piece, and he is with us in spirit whenever we perform English lute songs.

We are honored to have been bequeathed his notes and annotated copies of facsimiles from his indispensable research on English lute songs.

Special thanks to Jean Toombs and Glen Yasharian for their generous loan of lutes.