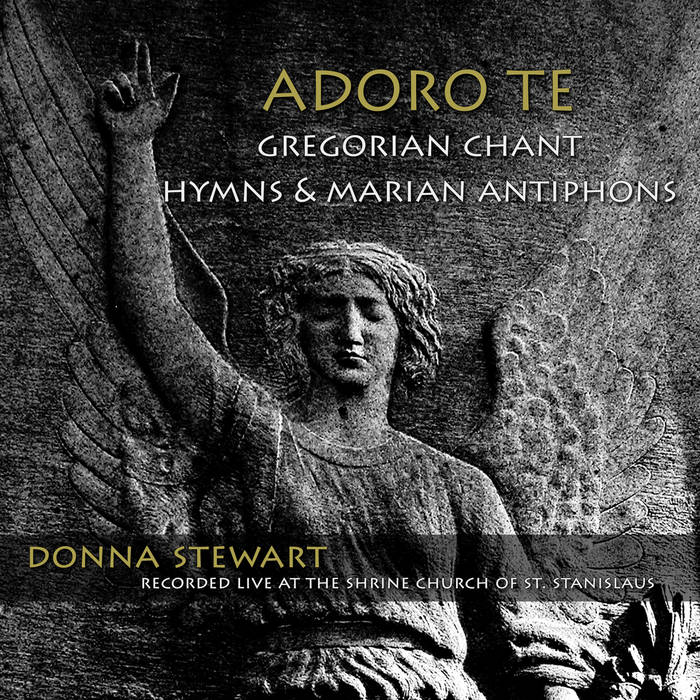 Gregorian Chant is a rare and precious link to our remote past, but as the embodiment of Christian liturgical practice, it is also a living, breathing form of worship still in use today. The vast repertory of chant both describes the outline and fills in the minute details of the cycle of the liturgical year..

Sacred chant heard in a sacred space has a special transporting quality and has moved hearts, minds and souls for the past few millennia. The chant hymns and antiphons selected for this project have special meaning, and we are very pleased to offer this beautiful, contemplative recording to the many listeners who have requested it.

For us, liturgical chant has many facets. We met in a schola singing this music together, and having spent decades singing chant and sacred renaissance polyphony in its liturgical context, we embrace both the spiritual and the functional aspects of the music. However, a working familiarity with chant has also enriched our professional artistry immeasurably, since other genres of early music were liberally laced with quotes from sacred chants, quotes that would have been recognized and appreciated by contemporary musicians and listeners.

For chant more than most music, the sound of the space is part of the music. Recorded live in the warmly resonant Shrine Church of St. Stanislaus in Cleveland, Ohio, we have captured the essence of the music’s devotional character with directness, clarity and a sense of musical purpose informed by two decades of singing chant in its liturgical context. We are delighted to have the opportunity to share the transformative power of experiencing these ancient hymns and antiphons in one of our favorite sacred spaces.

I rarely write reviews, but this is the exception that breaks the rule. When people offer to send me their music (and they do when they realize I can get it on the air), I brace my listening ears when I first play the sample track. Oh, what a delight it was to hear this!

When most of us think of a chant CD, we think of a “group effort.” That may be a choir of monks or nuns, perhaps a professional ensemble or even a gifted church choir. We don’t think soloists, the exception being teaching and enthusiast recordings found on YouTube. Donna Stewart’s new CD, Adoro Te, is just that – a solo woman’s voice singing a range of chant hymns and antiphons. And it is quite effective.

Stewart is best known as a singer of Renaissance lute songs, as half of Duo Mignarda. In fact, she met the lutenist while they were singing in a 5-voice schola for a weekly Tridentine Mass. She has also recorded with the baroque ensemble Apollo’s Fire. So she is both professionally and personally committed to the genre.

Recorded live at the Church of St. Stanislaus in Cleveland, Ohio, Stewart makes full use of the church’s reverberent acoustic. Each phrase gets a chance to resolve itself into silence. And she doesn’t hesitate to use a judicious amount of rubato in her singing – never schmaltzy – just the right amount of plasticity that beautiful vocal lines demand. Importantly, Stewart has the beautiful voice equal to those melodies; it is seamless and rich. Not an imitation boy-choir white tone, but a restrained and attractive adult woman’s voice.

The 15 selections begin with the solemn tone Salve Regina and conclude with the Adoro Te Devote. In between are classic chants from all parts of the liturgical year: Creator Alme Siderum, Jesu Redemptor Omnium, Ave Regina Caelorum, Ubi Caritas, Crux Fidelis and Pange Lingua, Veni Creator Spiritus, and Ut Queant Laxis, among others.

Is this the model for your schola’s singing? Probably not. At the same time, this is the album to give to folks who might find it a window into understanding the chant ethos. And it’s an album worth listening to yourself because its very different style can open an experienced singer to new ways of thinking about both text and melody. Further, if we insist that chant has to be “my way or the highway,” we may find more on the on-ramp than driving along with us.

The album is available directly from the artist at Mignarda or at the usual download sites. As a proponent of women’s voices, especially in a genre that is often regarded as exclusively male, I cannot praise Donna Stewart’s Adoro Te, highly enough.