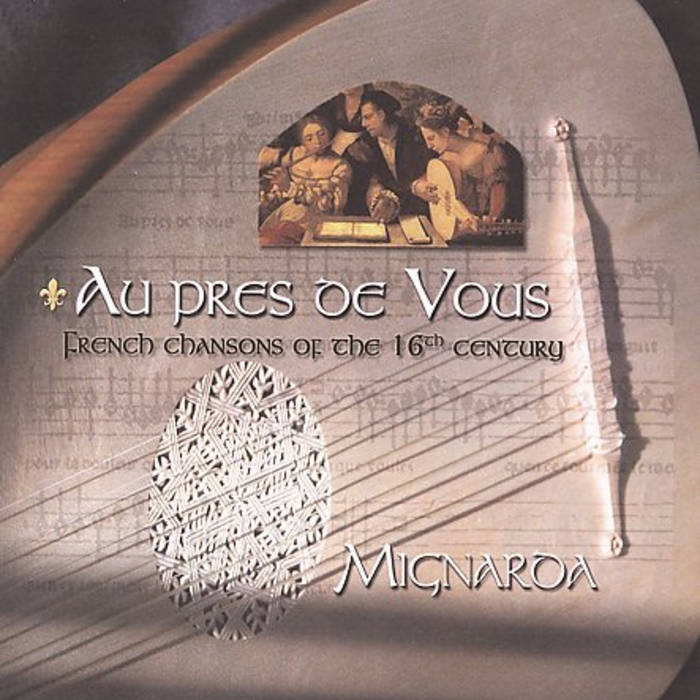 Without music, poetry is almost graceless, just as music without the melody of verses is inanimate and lifeless.
--Pierre de Ronsard

This CD presents a sequential program, the results of a very personal exploration of the important marriage of music, poetry and dance tunes of sixteenth century France. Like gems arrayed in a pleasing setting, each individual piece shines on its own but sparkles all the more in sequence. Historical research must have a starting point that draws one in: Embracing the more popular surviving examples of chansons and dance tunes, like warm remembrance of a familiar story, reveals the reasons why the piece became popular and always seems to prompt us to turn the next page where something new and very special lies awaiting discovery. Some chansons and lute solos on this recording may have a familiar ring to early music specialists but they are mingled with a few premiere recordings of forgotten gems and a generous sampling of the rare and less familiar.

Claudin de Sermisy is probably the best known exponent of the16th century French chanson, and we include five of his masterpieces in miniature. Au pres de vous, while less known today, was one of Claudin's more popular chansons, and the heartfelt sentiment was immortalized in an anonymous painting, now in the Musée Carnavalet, Paris, where the music is clearly visible on a table and performed with voice, flute and bass lute. Pour un plaisir, a poem that was set by several composers, is an example of poetry and music joined with a simple texture, effectively communicating the text. Jouyssance vous donneray was probably Sermisy's first major 'hit', as evidenced by the number of times the chanson was printed, copied into manuscripts, and arranged for instruments. It also appeared in a painting by the mysterious Flemish Master of the Half-Lengths, c.1530, again depicting voice, flute and a tiny lute. With poetry by Clément Marot, this popular chanson puts a rather modern face on the tradition of courtly love. Dont vient cela, also with poetry by Marot, was another very popular chanson which was later arranged in a psalm setting, for lute, keyboard, dance ensemble, and even appeared in a later vocal setting with a Scots text. Las je me plains, Sermisy's setting of a text by Ronsard, is simple and transparent yet seems to look ahead to a more flowing and sensuous melodic style.

The publications of Pierre Attaignant (c1494-c1551) were a major vehicle in the phenomonal popularity of the 16th century chanson. First published in part books in Chansons Nouvelles en musique à quatre parties (1528), several chansons appeared in arrangements for voice and lute or lute solo in the publication Tres breve et familiere introduction (1529). The book included a handful of purely instrumental preludes along with some of Sermisy's more popular pieces and anonymous chansons such as Fortune laisse moy: Attaignant’s setting for solo lute was the source for our vocal ornaments in this piece. In 1530, Attaingnant published Dix huit basses dances, another seminal book of dances arranged for the lute. Our recording includes selections from all three of these publications by Attaignant, with our own settings for voice and lute from the 1528 print. De mon triste desplaisir, probably by Jean Richafort, was the basis for the famous song by England's Henry VIII, Pastyme with good company, alluding to the well known French-English connection which we exploit with some of our choices for lute solos. Doulce mémoire is a justly famous four-part chanson with music by Pierre Regnault (Sandrin, c. 1490 – 1561) and text by François I of France, in this 1555 two-part adaptation by Lyonese arranger and publisher, Antoine Gardane. The pair of beautiful chansons, Toutes les nuictz by Clément Janequin, and Je suis déshéritée by Pierre Cadéac, are related in that both composers served in the post as tutor for singers of the bishop of Auch, Janequin in the 1520s and Cadéac in the 1540s.

Stepping forward to the mid-16th century with the chansons of Thomas Crecquillon and Jacques Clément (Clemens non Papa), we observe a transition to a very melodic cantus line. Several of our selections are gleaned from a 1553 print by Pierre Phalese, which presents arrangements of four-part chansons for solo voice and lute, some of which we have edited with reference to the original part music. We make amends for the more rustic chansons with a setting of Psaume 114, Quand Israel hors d’Egypte sortit by Guillaume Morlaye, an elaborated arrangement for voice and lute of Pierre Certon's (c1510-1572) original tenor. We close with two of Orlando Lassus' better-known stylistically late chansons, Bonjour mon coeur and the chanson spirituelle, Susanne un jour.

Lute solos included are heavily weighted toward dances, with two very different pavanne & gaillarde pairings, and a few branles. The preludes, ricercars and fantasias act as interludes and connective tissue between chansons, as they were originally intended.

Regarding sources and our performing editions for chansons on this recording, the only off-the-shelf pieces are Le bon espoir by little-known composer, Josquin Baston, and Venes mes serfs by Jacques Clément, both pieces previously unrecorded. While in need of editorial correction, both of these chansons are from Pierre Phalese’s 1553 publication, Hortus Musarum, and appeared with a separate superius line and the lower parts intabulated for lute. All other chansons were arranged from their original part-song versions by Ron Andrico, following the well documented 16th century practice known as intabulation. While perfectly serviceable versions for voice and lute of Jouyssance vous donneray, Dont vient cela, and Fortune laisse moy ma vie appear in Attaignant’s 1529 publication, in some cases we chose to restore missing contratenor parts and add appropriate decoration of otherwise static lines. For some chansons we have sought and found additional verses in printed literary sources and added them when appropriate. In the case of De mon triste desplaisir, Las je me plains, Je suis déshéritée, C'est a grand tort, Misericorde au martir amoureulx, and Bonjour mon coeur, we referred to published 16th century intabulations for solo lute as a guide for pitch and decoration. It turns out that the poetry to several chansons communicates to much better effect when the part music is pitched in the same range as the versions for solo lute, offering further evidence of an entirely flexible and adjustable historical pitch standard.